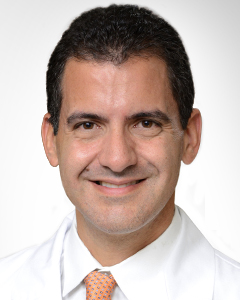 Talk to a Representative

Call Me Back
Close

Request an Appointment With:

* If you are experiencing a medical emergency, call 911 immediately.

If you chose to be called, you may be asked for more information, so please have your insurance information ready.

Do you need to speak with someone regarding your appointment request? Call us at 321.843.2584

Talk to a Representative

* If you are experiencing a medical emergency, call 911 immediately. *

Luis Herrera, MD, thoracic surgeon, is the medical director of the Rod Taylor Thoracic Care Center at Orlando Health Cancer Institute. He is a member of the Thoracic/Head and Neck Cancers Specialty Section. He joined Orlando Health Cancer Institute from The University of Texas MD Anderson Cancer Center in Houston where he served as chief resident of thoracic surgery and is currently appointed as an adjunct assistant professor of surgery in the Department of Thoracic Surgery.

Dr. Herrera is involved in basic and translational research focusing on new treatments for lung and esophageal cancer. He has received several awards for his work, including the Minority Scholar Award in Cancer Research from the American Association for Cancer Research, the National Institutes of Health Minority Supplement Grant from the National Cancer Institute and the United States Surgical Corporation Resident Research Grant.

He has been published in the Journal of Thoracic and Cardiovascular Surgery, The Annals of Thoracic Surgery, Neoplasia, Clinical Chemistry, Nanomedicine and has given presentations at several national meetings.

This is a comprehensive list of insurances accepted at Orlando Health hospitals, outpatient services and physician groups. Be sure to contact your individual insurer to verify coverage. Not all providers accept the same insurance. If possible, check with your providers prior to your procedure or appointment to verify coverage.

Why do some Orlando Health physicians not have a patient experience rating?

The Patient Satisfaction Rating is an average of all responses to the care provider related questions, shown above, from our nationally-recognized Press-Ganey Patient Satisfaction Survey. Patients that are treated in outpatient or hospital environments may receive different surveys, and the volume of responses will vary by question.

Responses are measured on a scale of 1 to 5, with 5 being the best score.

Information will update every 5 minutes. ER Wait Times are approximate and provided for informational purposes only. Estimated Wait Times as of: Tuesday, February 7, 2023 9:15 PM